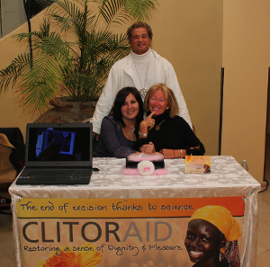 We were priviledged to have the performance of Vagina Monologues in IsRael and that gave us a great opportunity to install our table to promote Clitoraid in the lobby of the Dimond Theater of Tel Aviv.

The organizer Nitsan was really charming. She was so kind to give us 3 free entrance tickets.

It is fantastic to have this kind of performance in countries of the Middle East where sexuality is still taboo.

We were at the right place to represent Clitoraid and had a great success.
Tweet 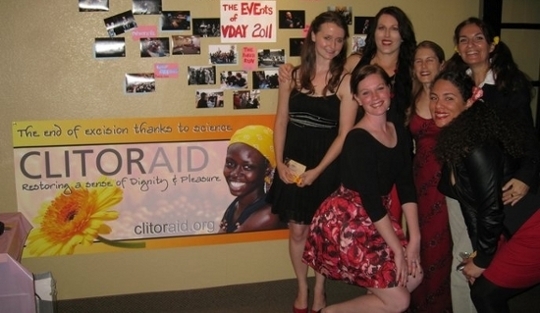 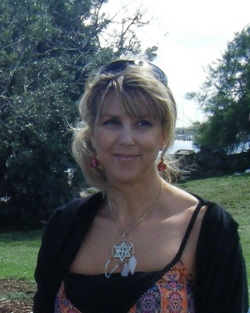 The Clitoraid stall at Melbourne Sexpo was a great success gathering donations of over $4000
Our stall was visited by a Community radio station 3CR presenter. Dale does a show called Girls Radio Offensive every Sunday afternoon. She was very touched by the Clitoraid mission and invited us to speak on her show. During the hour we were about to share and inform about how Clitoraid gathers donations to provide reconstructive surgery to victims of FGM to restore their pleasure and dignity along with post operative care, doctors and the hospital in Burkina Faso. We talked about sexuality and pleasure being a fundamental part of our being and when this is taken away it leads to emotional and physical problems. It was so refreshing to be able to speak freely on air live about sexual pleasure and the clitoris! On numerous occasions the clitoraid.org website was mentioned for people to find out more and donate online. 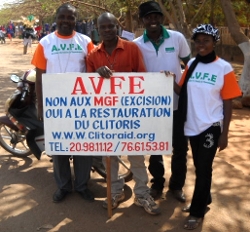 On the occasion of the celebration of International Day of Zero Tolerance of Female Genital Mutilation on the last February 6th, we have conducted awareness campaigns against FGM and promote Clitoraid with the restoration of the clitoris in Burkina Faso and Gabon. 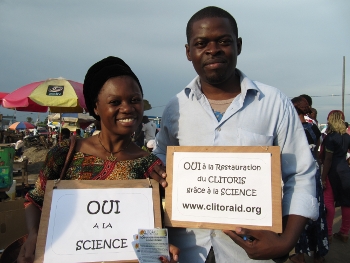 Tuesday February 8, we closed our action with a show on radio station Africa No. 1 with the same theme Excision again. A VERY VERY NICE RELEASE OF LOVE… TO SAVE LIVES ... LIVE THE SCIENCE!

In the picture: left to right: Mariale Lemlepa and Kemi 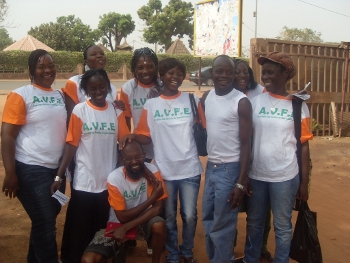 In Burkina Faso by Edjibié

In Burkina Faso, we started our outreach in the cities of Bobo-Dioulasso and Ouagadougou targeting private schools and high schools. We were dressed in t-shirts AVFE (Way of the Feminine Fulfillment Association), an association of Burkina Faso affiliated to Clitoraid.

In the picture: Up to down and left to right: Yannick / Souadou, Edjibie, Christine, a brother, Princesse Monique / Alima, Sibilla Alida and Aicha 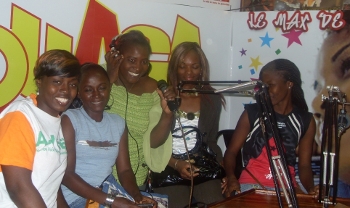 Sunday February 12, we participated in a broadcast of Ouaga Radio Fm. Edjibié, Clitoraid local coordinator, says:
"As expected Fahir and myself went to Ouaga Radio Fm for the program powered by the charming Kadi DRAME, a famous actress.

Were invited: Nadège TIENDREBEOGO, LLB student who has been challenged by the theme of the show, Adama SAWADOGO, member of the management of social action, Assita KONATE, information secretary and accounting clerk for "fan club Ouaga FM radio," Fahir DA member AVFE, Edjibié KANKOUAN, President of AVFE branch of Ouagadougou.

The theme of the topic "Why excision persists?" The program lasted two hours including one hour of debate followed by an hour dedicated to the interventions of listeners. The discussion was very rich and exciting including the fact that female listeners had the courage to call to share the stories of their poignant experience. They have launched a heartfelt cry to all circumcisers to abandon the practice.